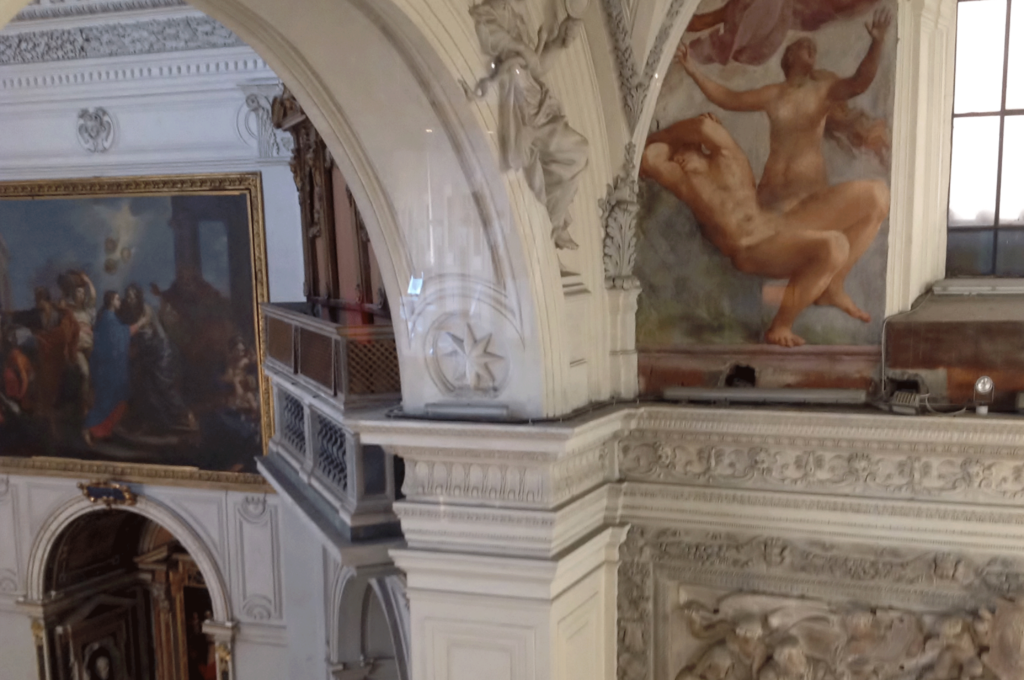 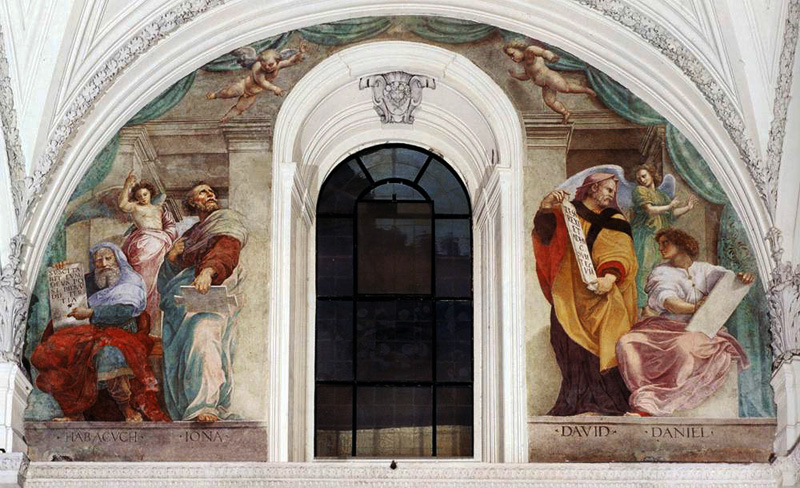 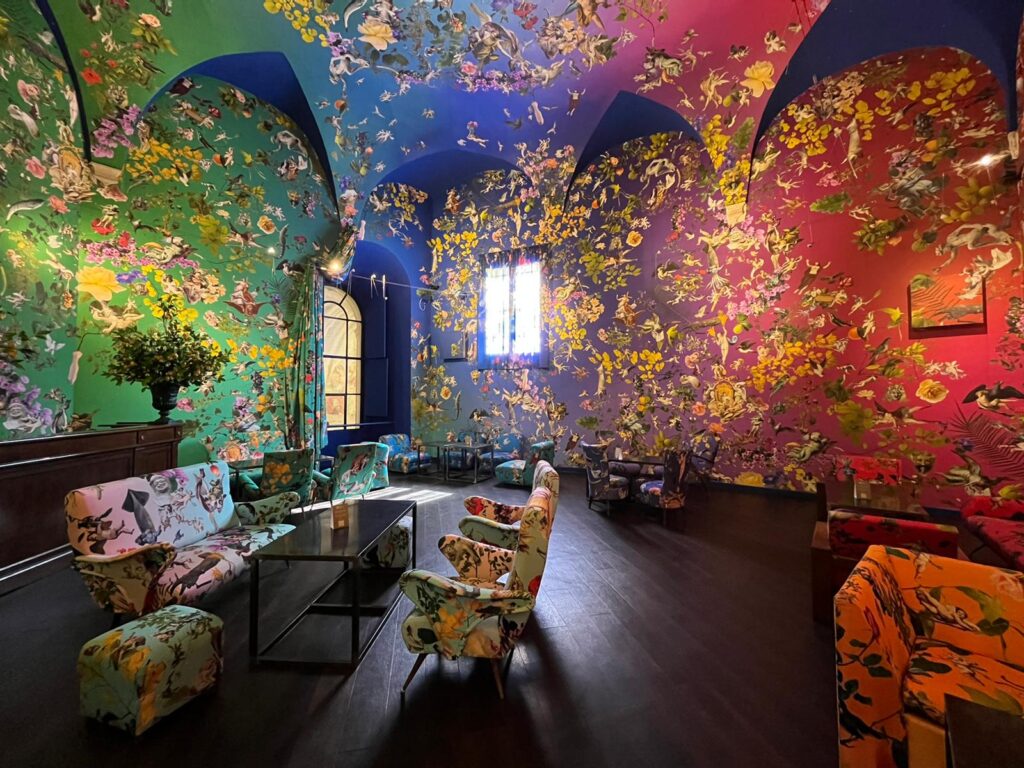 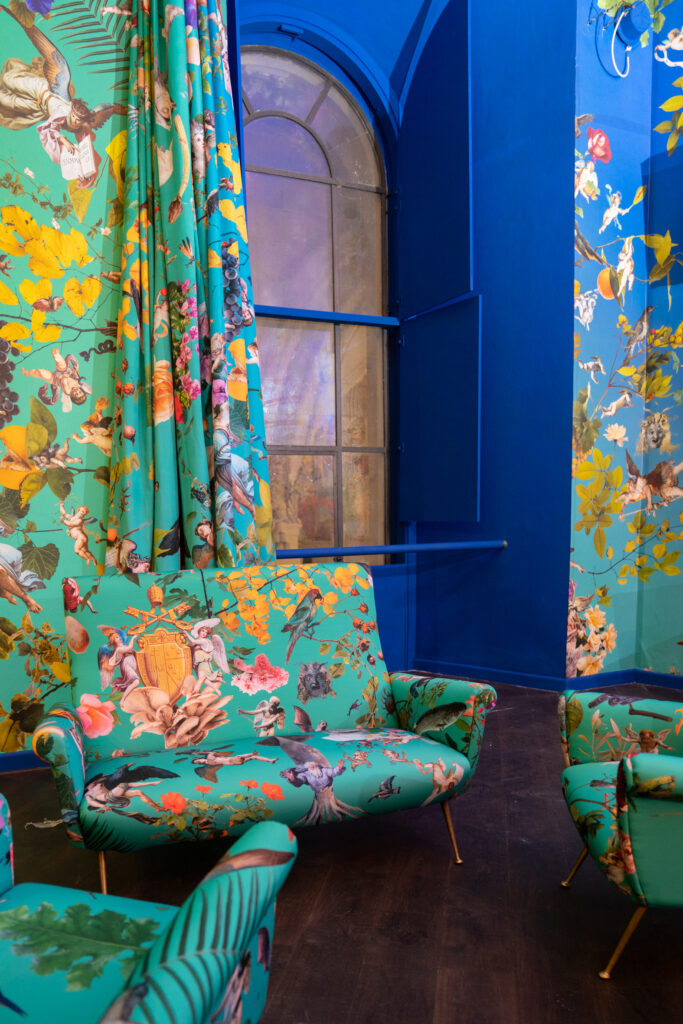 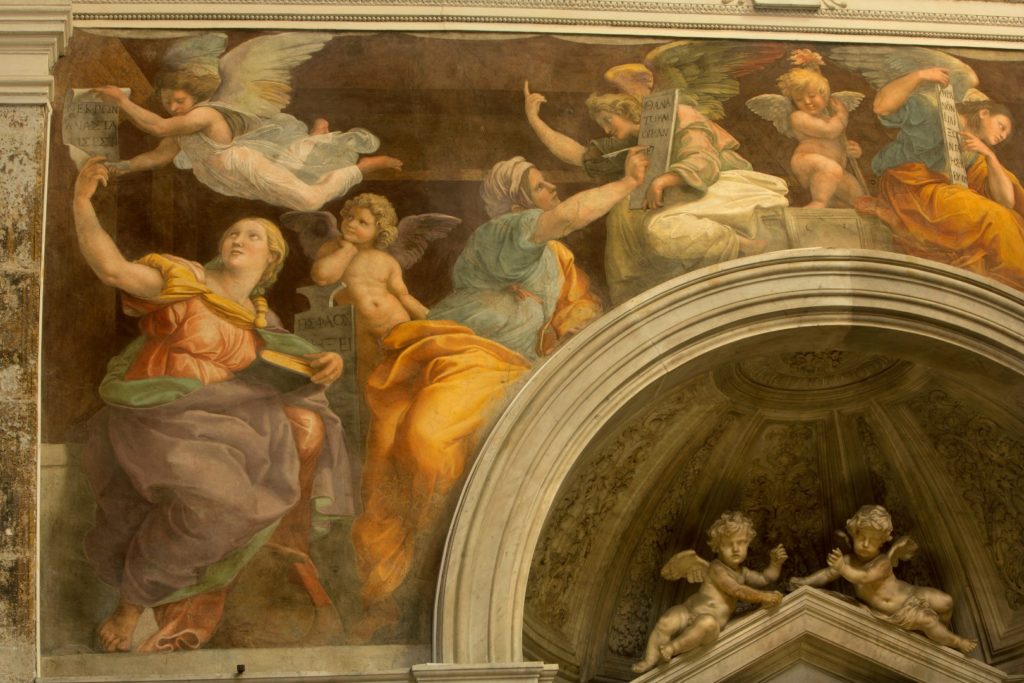 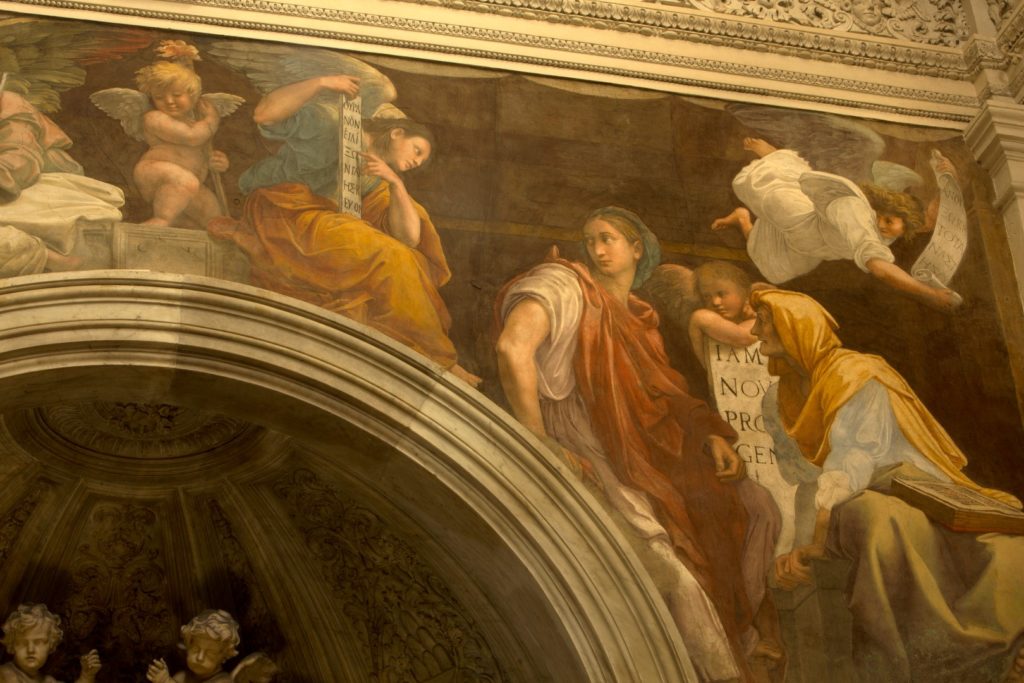 Sybil and the Angel is an artwork by Renaissance master Raphael Sanzio.  It is present inside the Basilica of Santa Maria della Pace and you can admire it from the first floor of the Chiostro del Bramante in the “Sala delle Sibille”, next to the Coffee Shop and Bistrot.

Raffaello Sanzio, or Raphael, was born on April 6, 1483 in the Italian town of Urbino and died  April 6, 1520 in Rome.  He was a painter and architect during the High Renaissance period.  Compared to other Masters of the time, Raphael remained productive throughout his lifetime, running a workshop that included 50 students and assistants.

The Basilica of Santa Maria della Pace, adjacent to the entrance to the Chiostro del Bramante galleries, contains a celebrated work of art created by Raphael around 1515, a painting almost six metres wide, known as the Sibyls fresco.

During the same period, between 1508 and 1520, the artist created the rooms in the papal apartments in the Vatican Museums (a 25-minute walk from the Chiostro  > Viale Vaticano, 00165 Roma RM).  The rooms are: Room of the Segnatura, Room of Heliodorus, Room of the Fire in the Borgo and Room of Constantine.

Raphael is buried in the Pantheon (600 meters from the Chiostro > Piazza della Rotonda, 00186 Rome RM).  The Tomb, surmounted by the Madonna del Sasso, sculpted by Raphael’s pupil, Lorenzetto, features an epitaph by Pietro Bembo that says “Here lies Raphael, from whom nature feared while he was alive to be won; but now that he is dead he is afraid of dying”.  On the right, a plaque commemorates Maria Bibbiena, the painter’s fiancée, while on the left is a nineteenth-century bust of Raphael, by Giuseppe Fabris (1833).

The fresco is visible from a specially adapted window in the Sibyls room, which is accessible from the open porch of the mezzanine of the Chiostro del Bramante.

An audio-visual guide explaining the fresco has been installed beside the window.

The painting was commissioned by the Sienese banker Agostino Chigi, whose highly influential position allowed him to obtain permission from the Pope to build two private chapels in the basilica.  The fresco is considered a work of notable formal beauty and refinement.

The figures are arranged symmetrically around a central point occupied by a cherub, in a composition typical of Raphael’s style, as is the richness of symbolic and literary allusions.  Raphael draws a direct connection between the angels, Christian messengers bearing the word of God, and the Sibyls as their ancient equivalents, through whom the ancient pagan gods communicated their will.

The importance of the Sibyls in Renaissance iconography is reinforced by their prominent appearance in Michelangelo’s Sistine Chapel frescoes. A comparison between Michelangelo’s Sibyls and those of Raphael brings to light the differences in style between these two great artists of the 16th century.

The sibyls painted by Michelangelo are towering figures whose monumental physical presence conveys their inner strength. Raphael’s, by contrast, are elegant, lyrical and light. Despite their ability to foresee the future, the four oracles nonetheless appear variously captivated by the appearance of God’s angelic messengers. The four figures thus come to embody the new Christian interpretation of Antiquity.

The four Sibyls – the Cumaean, the Persian, the Phrygian, and the Tiburtine – are depicted in a perfectly symmetrical fashion around the arch at the entrance to the second Chigi chapel.

Three of them are portrayed as young maidens, whereas the Cumaean Sibyl is depicted as an old woman. Next to her Raphael has transcribed Virgil’s verses about the new generation that “descends from heaven on high”, emphasizing a widely held belief that this was a prophecy regarding the eventual victory of Christianity.